Say it quietly. But after 18 months of almost zero activity the first signs of renewed interest in the Tour business are emerging.

Our Templar Tours were booming in 2019. 2020 looked like being even busier. We were getting enquiries and bookings from across the World. As always the bulk of it was from the USA. But Canada and Australia were the source of a lot of interest as well.

In January 2020 I exhibited at the Dublin International Tourism Fair. Knights Templar Tours of Tomar shared a stand with Shamrock Walking Tours and Caminhos Historia (Historic paths). Marie, my partner in Shamrock Walking Tours was extolling the virtues of walking in Central Portugal. João, my long-time buddy and Tour Guide and his wife Cecilia were launching his new venture, Sacred Paths. Selling religious pilgrimage and history tours, Jewish and Islamic as well as Catholic. 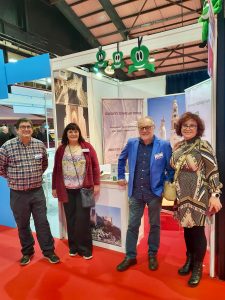 João, Marie, Me, Cecilia at the Dublin Holiday Fair

The Exhibition hall was packed and we all had lots of interest. There were stalls from across the World including China. We noticed that very few people were visiting the China stall and we heard talk of some sort of disease breaking out there. No problem for the rest of us. The TUI Tour Agency next to our stand was packed with people buying package holidays in the sun. The Caribbean Cruises opposite were selling like hot cakes. Then the whole world fell apart. Our last Templar Tours were in March and after that nothing, nada, apart from a tiny trickle of people living in Portugal in between lock downs. This is how it continued throughput those dreary, and sometimes scary, months. Sandra who is my principal guide had to take up online teaching to be able to keep paying her bills. Across the Tourism sector things looked pretty bleak for businesses like Templar Tours in Portugal that rely mostly on International Tourism. There was an occasional bit of respite as some countries relaxed travel rules. 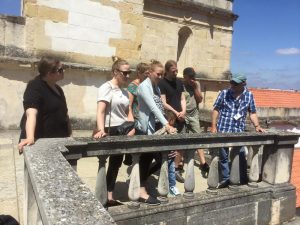 Taking a tour in ‘normal’ times

Followed quickly by tightening them. For some businesses, like Templar Tours of Tomar, it was a case of battening down the hatches. Waiting for the day when things would start to improve. Sadly for others their businesses collapsed. We all got our ‘Clean and Safe’ certificates after attending Online courses on how to deal with Covid restrictions. We exchanged views about what the Tourism sector was predicting. It was mostly gloom followed by doom. Luckily both Sandra and my colleagues from Caminho Historias managed some respite from the growth in ‘staycations’ as the Portuguese people rediscovered their homegrown attractions. But the market for Templar Tours is almost totally International from the English Speaking World. Instead of waking up to read the email emails from across the World I had just an occasional hopeful enquiry for 2022. Then as International travel restrictions started to relax a little a trickle of enquiries started to come in. Then in late August September this year Templar Tours got an actual booking for a couple from Colorada for a tour in late September. At that time there was still a lot of uncertainty about travel to Europe from the USA. But the couple managed to get across the water and had a half day tour with Sandra. They did the Templar Castle and Convent of Christ, the 15th century Synagogue, the medieval Jewish Quarter, the Templar Pantheon church of Santa Maria do Olival and the historic centre. 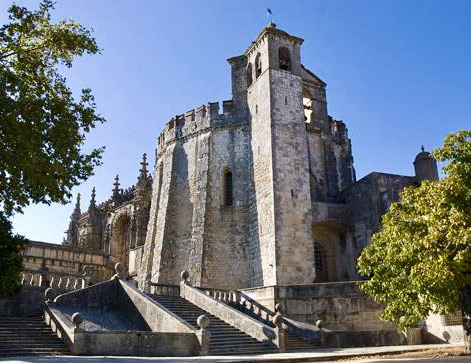 The Convent of Christ in Tomar

My first Tour from the USA in nearly 2 years. Then other enquiries started to trickle in. Sandra was able to do them all. But a request at short notice for a Convent of Christ Tour from an Irish couple came in and Sandra was unable to do it. So for the first time in nearly two years I found myself waiting in the Convent of Christ carpark to meet clients on a Templar Tour. I was feeling slightly apprehensive. Such a long time since I had even visited the Castle and Convent, let alone taken anyone on tour. I knew from Sandra that quite a few parts of the Complex were still closed due to Covid restrictions. Would I still be able to find my way round? Would I be able to remember everything? But I didn’t need to worry. The clients were a really nice young couple from Ireland. As we stood outside the entrance to the Castle and I started to talk it was like riding a bicycle. You never forget how to do it. My apprehension disappeared as we walked up in to the castle and I experienced again the joy of showing Templar Tours’ clients the amazing World Heritage site. I have taken hundreds of people on tour inside the Templar Castle and the Convent of Christ. I never lose my sense of awe as I go round the incredible complex. Some parts of it were still closed because of Covid restrictions and talking through a mask for two hours was quite a strain. But after the Tour I realised just how much I have missed taking people on Templar Tours. Seeing the look of astonishment on their faces as we visit the many ‘wow’ factors inside the complex. Showing them the little ‘human’ things as well as the magnificent structures and architecture. Following that first tour other bookings and enquiries have come in for a variety of Templar Tours stretching in to late 2022. Not just for Tomar but The World Heritages sites at Alcobaça Abbey and Batalha Monastery, as well as further afield in Évora and Monsanto and our stone circles tour. The Abbey of Batalha

Templar Tours has provided tours for people from the U.K. USA and Sweden. I have done two tours myself and have two more to do next week. Almost all of the Castle and Convent is now open. Small beginnings. Nothing like it was two years ago but it’s a start. It feels almost like normal. However the Pandemic hasn’t gone away. We are still not getting tour enquiries from many of the places we used to like Australia or Japan or Israel. Maybe things will open up in 2022 or maybe it might not be until 2023. Who knows? But Templar Tours will still be there. Showing clients the wonders of our Knights Templar region and the wider Portugal. 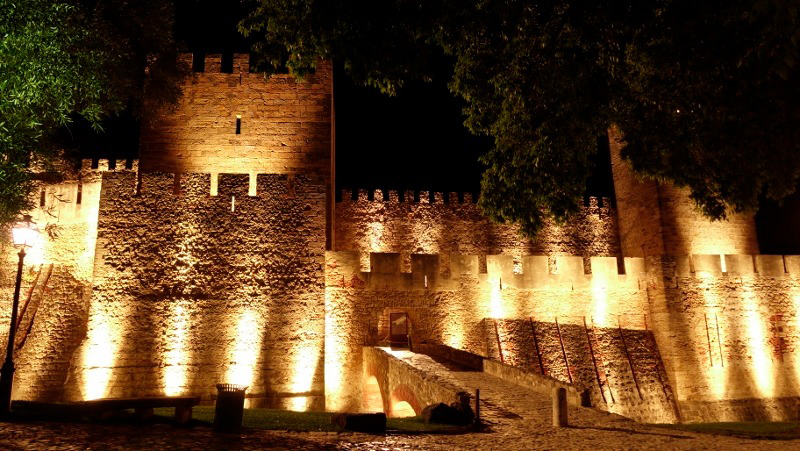 The Knights Templar Castle in Tomar

This entry was posted in Templar Tours. Bookmark the permalink.

This site uses Akismet to reduce spam. Learn how your comment data is processed.

◂ Back to Blog

The Templar Region...
Videos...
What people are saying...